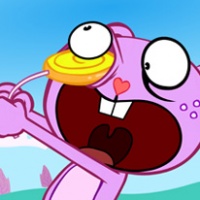 Your question has been sent!

final question, and most wanted to be answered: what really happened to pops wife? could you make an episode explaining what happened? also people are shipping pop x disco bear because they are both bears

Kenn Navarro: Mysteries are more interesting rather than if we just told you what happened. Where's the fun in that?

Asked by Removed user
5 years ago

how did you get the idea to collaborate with fall out boy? did they come to you?

Kenn Navarro: We found out that we had a mutual acquaintance and that we were both admirers of each other's work. I don't recall who reached out to whom first, but we eventually got in touch and it just so happened they were looking for something to do with one of their songs, "Carpal Tunnel of Love." We flew down to meet with Pete Wentz (super nice guy!) and collaborated video. The rest is bloody history!

Asked by Removed user
5 years ago

Does Petunia & Giggles die in Gems the Breaks?

Kenn Navarro: It's left to the audience to decide. What do you think? Psst, there's no right or wrong answer ;)

Asked by Eric
5 years ago

flaky and/or flippy are allergic to more than peanuts?

Kenn Navarro: I can see Flaky being allergic to other things. She's kind of fragile that way. As for Flippy, he's allergic to anything that makes him flip-out!

Who answers these questions?

Asked by Kyrosies
5 years ago

Did Cub survive in DogGone It

Although it looked pretty vicious, it's possible Cub could've survived that attack. He's a tough guy!

Asked by Dodger Chippy
5 years ago

Are you gonna do anything big with Truffles (besides cameos?)

Kenn Navarro: No plans for a bigger role for Truffles. We have to honor the spirit of the contest when we had the fans vote on which character would join the cast. You don't want us to go back on our word, would you?

Asked by Chickenmaster
5 years ago

can you tell to fandom the backstories from the characters? :D

Kenn Navarro: That would be spoilers! You'll just have to wait for us to do an episode to find out more about the characters.

Asked by Karen Makara
5 years ago

Is there any new episodes this year?

Kenn Navarro: We're in talks to do some shorts but nothing to announce just yet. Stay tuned!

Asked by Jordan Kaplan
5 years ago

If the Simpsons crew ever asked, would you guys be willing to make a couch gag?

Kenn Navarro: In a heart-beat!

Asked by Justin
5 years ago
We use cookies to ensure that we give you the best experience on our website. We also use cookies to show you advertising that is relevant to you. By continuing to browse the site you are agreeing to our use of cookies. Please review our cookies information for more details.